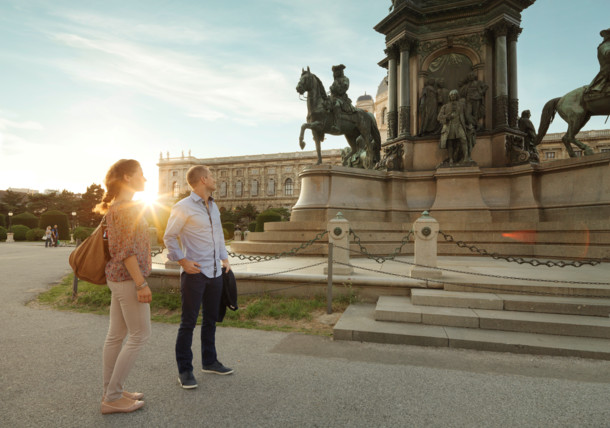 The splendid baroque Belvedere Palace today houses the Österreichische Galerie (Austrian Gallery) displaying the largest collection of works by Klimt (The Kiss) and Kokoschka as well as famous paintings by Schiele. Vienna’s prime landmarks are the gothic Stephansdom (St. Stephen’s Cathedral), the Giant Ferris Wheel in the Prater, Vienna’s old recreational park, and the Spanish Riding School with their world-famous Lipizzaner horses.

Vienna has more museums and galleries of international reputation: Kunsthistorisches Museum Vienna with the world’s largest collection of Bruegel paintings, MuseumsQuartier with the Leopold Museum (Schiele), Museum Moderner Kunst (Museum of Modern Art), Architekturzentrum (Architectural Centre) and Kunsthalle rank among the city's most important cultural venues. The Albertina is home to the world’s largest collection of graphic arts and prints (60,000 drawings, 1 million prints) and recenyly opened the Albertina Modern to showcase contemporary artworks.

Vienna owes much of its international fame to the many celebrated composers who lived and worked here including Strauß father and son, Mozart, Beethoven and Haydn. The Vienna Philharmonic Orchestra is one of the world’s best, the Staatsoper one of the world’s leading opera houses, and the Vienna Boys’ Choir one the world’s most famous. Vienna has established itself as a great musical metropolis.

In Vienna, traditional coffee houses, rustic wine taverns, and the beloved sausage stand (Wuerstelstand) exist alongside top restaurants and shops. Time-honoured events, such as the Vienna ball season create a unique and very special ambiance. Another special feature of Vienna is its many green spaces and recreational areas such as the Wienerwald, the Prater, and the Donauinsel.